I’m kicking off a series of Dancing with Pain® online programs, starting with, “Don’t Fight Your Pain. Dance with It!” – a multimedia event featuring live music and spoken word performance, personal storytelling, and self-care tips – including a live demonstration of Dancing with Pain® basic moves – to inspire and guide you on living with and healing from chronic pain. This event has been designed for lay people and wellness practitioners alike, and is useful whether you’re taking a holistic, conventional, or integrative medicine approach to pain management.

About eight years into this ordeal, a series of serendipitous experiences led me to an epiphany – that by reconceptualizing dance as more than leaps, twirls, and fancy footwork, I could use it to heal myself. I started “dancing” with whatever part of my body was not in pain – initially, only my arms – and within as little as an hour, I would go from limping to leaping. In the beginning, I would wake up on a pain level around 7-8, then dance, and the pain would go down to a 2-3, but then I’d wake up with the pain jacked up again. While I wanted to progress the way I did before the car crash – for example, doing a new workout routine that got easier each week – I was grateful that at least I had something to get the pain down each day.

Would your organization like to offer a fun Jewish diversity & inclusion event - without the effort or expense of program development?

Sign up to become a KHAZZOOM program affiliate, at no cost, and receive a unique registration URL to share with your members - with one of two options: 20% of ticket sales will be donated to your organization, or your members will get 20% off ticket sales (in addition to early bird discounts), as per your preference. Contact me today, to become a program affiliate or find out more information!

Loolwa Khazzoom’s award-winning work has been featured in the 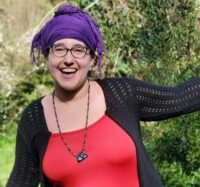 New York Times, Rolling Stone, BBC News, and other top media internationally, and she has presented at the Simon Wiesenthal Center, Barnard Center for Research on Women, Harvard University, and other leading institutes worldwide. She pioneered the Jewish multicultural movement in 1990 and was the first woman worldwide to lead egalitarian Mizrahi/Sephardi prayers.

Get Cash and Bonus Discounts as a KHAZZOOM Ambassador!

If you believe in my mission and message, help me positively impact the world, by becoming a KHAZZOOM ambassador. For all my digital products and programs, you’ll get a special code with one of two options:

If you enjoy my work, become a Patreon member for as little as $3/month (cancel anytime), and receive the following benefits:

Become a patron and start enjoying the benefits now!