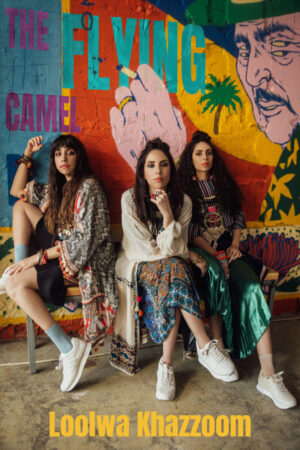 On Jan 14, trailblazing Jewish multicultural educator Loolwa Khazzoom releases the second edition of her 2003 ground-breaking Mizrahi feminist anthology, with new 2022 updates – including celebrity Yemenite-Israeli band A-Wa featured on the cover and in the introduction.

Seattle, WA – Two decades ago, Iraqi-American Loolwa Khazzoom published The Flying Camel: Essays on Identity by Women of North African and Middle Eastern Jewish Heritage. The book was taught by professors throughout the Ivy League and at universities worldwide, was positively reviewed by international media, including The San Francisco Chronicle and The Jerusalem Post, and was endorsed by notables including former Black Panther leader Angela Y. Davis and Lilith Magazine founder Susan Weidman Scnhneider.

The first edition of the book, published by Seal Press, not only was the first anthology by Mizrahi/Sephardi women, but also the first anthology by BIPOC Jewish women, and to this day, it is ahead of the curve in Jewish Studies, Gender Studies, and Middle Eastern Studies – providing critical insights that have transformative impact in each field. The second edition of the book has new features, including the following:

Like the proverbial phoenix rising from the ashes, the seventeen women of The Flying Camel boldly emerge from the wreckage of their ancient civilizations and invite readers on an intimate journey of self-discovery, creativity, and defiance. Drawing from personal and ancestral memories, amidst the pursuit of soul-filled dreams and longings, anthology contributors navigate geopolitical upheaval and cultural homelessness, criss-crossing four continents and stepping back and forth through the spiritual portals of time. Nothing is quite as it seems, we learn, with identity constructs, loyalties, and politics dependent on so many variables that, ultimately, the borders perhaps dissolve into the greater expansiveness of who we are.

Alternately raw and fierce, vulnerable and tender, these gripping stories are deeply personal and uniformly honest, providing a secret passageway deep below the narrow scripts and slogans of today’s identity politics, and leading straight into the chamber of the heart. Reflecting a diversity of experience and perspective, and drawing from a collective wealth of knowledge, the stories naturally weave through topics including exile, body image, sexuality, class division, religious practice, domestic violence, the Middle East conflict, and other pertinent issues, in ways that are both insightful and refreshing.

Back Story
Growing up in San Francisco in the 1970s and 1980s, Loolwa Khazzoom felt like one of those balls in the classic pinball machine:

As far back as 1978, as an eight year old, Khazzoom was publicly speaking and writing about, as well as creating radical activist responses to, these dynamics, and in 1990, she launched a 20 year career as a trailblazing Jewish multicultural educator. As part of her mission, she was determined to carve out space for Mizrahi and Sephardi women to take up their full space and express themselves authentically, amidst each of the worlds where they had been compromised or shut out. To this end, in 1993, Khazzoom began seeking out other outspoken Mizrahi and Sephardi women, with the mission to compile and edit an anthology – originally entitled, Behind the Veil of Silence.

The dynamics she wanted to address, however, kept playing out in the development and publication of the book: At the time, all the Mizrahi/Sephardi women she knew were orthodox and accepted the traditional woman’s role, even reinforced it themselves. In addition, after finding and editing cutting-edge stories for the anthology, from Mizrahi women worldwide, nobody wanted to publish the book for another decade – alternately asserting that Mizrahi men, Ashkenazi women, or non-Jewish women of color needed to be included in the book, for it to have value or relevance.

Then 9-11 happened, and suddenly literary agents and publishers were clamoring for books on Middle Eastern women. Seven top literary agents asked to represent the anthology, and after choosing an agent, Khazzoom published the book with Seal Press, which had rejected it five years prior. Given the proliferation of books about women and veils at that time, Khazzoom renamed the book, The Flying Camel.

Sample Reviews
“The essays in this book, which traverse landscapes from Iran to Los Angeles, from Morocco to Beersheba, from Tunisia to Paris, are almost uniformly excellent as they manage to get beyond the usual PC ranting to be both provocative and moving…the writing is…surprisingly beautiful.” – Jerusalem Post

Editor Loolwa Khazzoom has assembled testimonials that come together like some sort of truth commission…“The Flying Camel” is living history…In words that are powerful and poetic…contributors come to terms with their multilayered upbringings. Through their struggles, they couldn’t take their Jewishness for granted. Through their eyes, we see the progress they’ve already made in breaking down stereotypes and ugly assumptions.” – The San Francisco Chronicle

For additional reviews, see “Reviews” on The Flying Camel.

Sample Endorsements
There is no question that The Flying Camel fills a gap in the available literature on the intersections between gender, ethnicity, nationality, and religion. I know of no such book of first-person, experiential accounts by Jewish women of color; the very idea of the book complicates the notion of “the Jewish community” in interesting and useful ways. This book is a useful undergraduate teaching tool for Women’s Studies courses, Ethnic Studies courses, Judaic Studies courses, and for Sociology courses that deal with the complexity of collective and individual identities. – Joshua Gamson, Associate Professor of Sociology, Yale University

The Flying Camel provides a wonderful opportunity to reflect on an unjustly neglected identity and to see it through the eyes of those who have lived it. It is certainly true that the lives of Jewish women from the Arabic-speaking world are unknown to too many in our society and that our understanding of questions of Arab, Jewish, and American identities are diminished by our ignorance. I find this book useful in the courses I teach on questions of identity and ethics in the contemporary world. – Kwame Anthony Appiah, Professor of Afro-American Studies and Philosophy, Director of Undergraduate Studies, Harvard University

For additional endorsements, see “Endorsements” on The Flying Camel.

About Loolwa Khazzoom
Iraqi-American Jewish musician, writer, educator, activist, and hazan Loolwa Khazzoom is the founder of award-winning alternative rock band, Iraqis in Pajamas – which combines Iraqi Jewish prayer with original lyrics and music, singing in English, Hebrew, and the Iraqi dialect of Judeo-Arabic. She also is the founder of the newly-emerging vocals-and-piano duo Shaddai Chants, which offers a New Age take on sacred Iraqi Jewish chants – created for meditation, yoga, sacred dance, and other healing practices.

In 1990, at the age of 20, Khazzoom pioneered the Jewish Multiculturalism movement – bringing to the mainstream both awareness and celebration of global Jewish heritage. The first woman worldwide known to lead egalitarian Sephardi-Mizrahi services, Khazzoom founded and directed numerous organizations that successfully integrated global Jewish heritage into mainstream programs and paradigms – working with preeminent institutes such as the Simon Wiesenthal Center, the Bureau of Jewish Education, and Harvard University, and serving community leaders and laypeople alike.